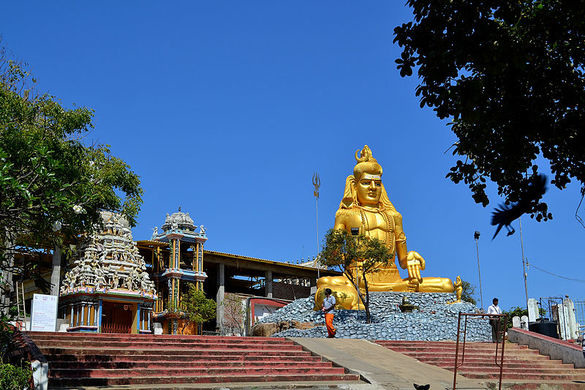 Trincomalee, in history books found its name as Gokanna, because of the earliest harbour city and as proceedings in the historical records about the Eastern Province in Sri Lanka. Spread over 2.896 meters² in area it is the most wonderful harbor that situated 257 distances from Colombo also known as money-making city in Sri Lanka,surrounded with lovely beaches like Nilaveli, Uppuveli and Pigeon Island very popular among tourists for Whale watching. Maximum temperature can expect as 33°C with 80% Humidity in weather.  People can enjoy very well by deep sea diving at by joining dive centers situated in Nilaveli also in Uppuveli. You can enjoy your holidays as much as you can at there in diving and swimming, surrounded with several early Buddhist temples. There are seven hot springs or wells that situated in Kanniya you can find it closer to 8 kilometers from Trincomalee. The tempreture of the water differs to one to another, which you can experience. Sell the Drying fish are the main local business that people do their own and it has very much helped the economic development status of the Trincomalee.

There are several landmarks such as Velgam Vehera is situated Horowupothana in 16 kilometers from off side of Trincomalee. There is a Galmetiyawa tank   Trincomalee road. There is A Buddha’s statue created with marble at that place. There’s and another Buddha constructed according to the Amaravati style at the earliest site found at Kuchchaveli. There, you can see ancient wrecks and ancient constructions around that place and some of the bricks found which have written some poems in ancient time over here. Ancient sites like Kantalai sugar farm, Etabendiwewa, Pulmodai, Mahaweli River Crossing you can visit to see also Sri Gajaba Len Vihara. You can visit that Archaeological Museum situated in Trincomalee too.