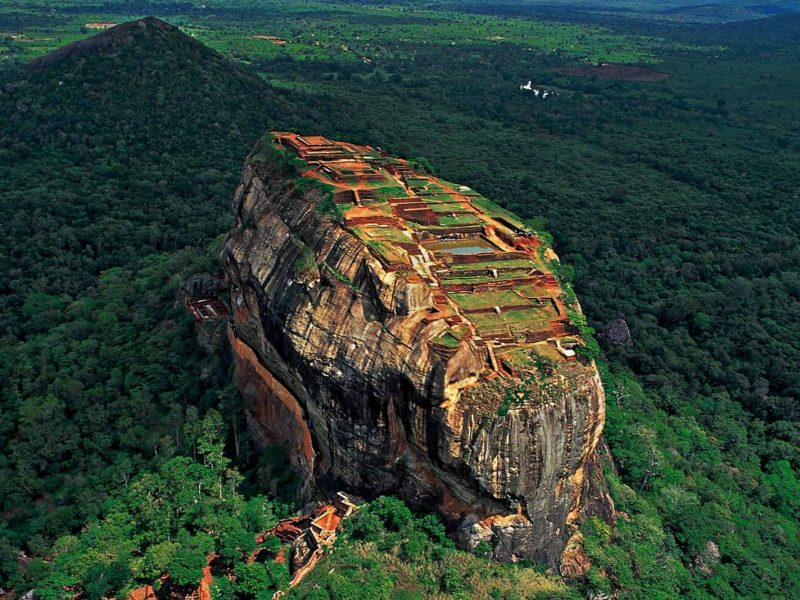 Sigiriya giving the meaning of Lion’s Rock in Sinhalese, it is built based upon the rock an olden citadel situated in Matale District and very closer to Dambulla city Central Province in Sri Lanka. This gigantic pillar of rock approximately 200 meters in height, according to history said that King Kashyapa built this citadel of Sigiriya as his new capital. In addition, said that his palace decorated with colorful paintings on top of the rock and side’s too. You can see the doorway of entrance decorated arrangement of a huge lion. After king Kashapas death this citadel was out of control and used as Buddhist religious foundation until 14th of century, Known as UNESCO World Heritage Site from the year of 1982.

You can get the stunning view from the top of the rock. You can see the wrecks while you are climbing the top. Said that there are 1200 steps that want to pass with 60 story building also you can find.

When talking about climate around the area of Sigiriya you can expect humid and hot weather with tropical environment, said that if you plane to visit Sigiriya the period of January to March months are ideal for that and February is the most suitable with in that period. Early in the morning or afternoon is very good for the hike, before sun come up and the day warms up because this rock catch the heat in day time and may causes occur some difficulties to climb. Maximum temperature in here can expect as 28 to 32 °C in daytime.

There is a Sky Palace located upon this Sigiriya Rock and the forest it was really a magnificent sight considerably everywhere. Sky palace can see as in sky view through luminous white mist. According to history said that king Kasyapa was been as if as god named as Kuvera lived in Alakamanda that found in myths about gods. This Sky Palace also known as for the imperial residence, that king, queen, and servants lived.

When talking about Sigiriya Mirror Wall is another special landmark, it was a greatly polished white granite wall and Sigiriya Writings carved on its surface. Suppose that ancient tourists who visit in here wrote more than 1800 styles, poetry and notes on the Mirror Wall this poems and notes affected to growth of Sinhala through period of 800 years.

There beautiful paintings known as Sigiri Paintings in Sigiri rock’s surface’s western side, believes that paintings about women’s of the king Kashapa’s royal court.